The Spinning of Romney 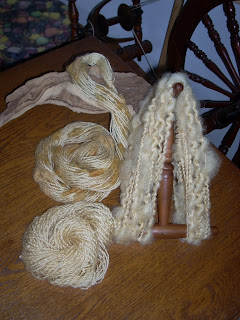 Back in the middle of March, I found a Private Message [in Facebook] from Pam Blasko [of Dream Come True Farm] , inviting me to be among several Fiber Artists to participate in the spinning of the some Romney fleece. This is the first round of hers and Virginia Scholomiti's [of The Yellowfarm]  new Breed Exploration series at Shepherds Talk. The intent of this study is,

"to work to keep the integrity and character of newly sheared fiber, with little or no processing."

Pam asked that we spin some Romney for them raw. She sent us 2 ounces, to be spun however we felt so inspired. 2 Ply, Art Yarn, Traditional, etc., Pictured to the left, are my three yarns--all spun in the grease. 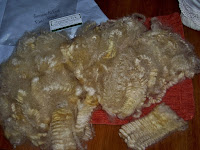 Up to now, I have never spun a yarn from raw fleece; in the grease.  Even when I first learned to spin; back in the late 70s--early 80s.  So--- while I was somewhat apprehensive, but--- always one who enjoys learning new things, I accepted the challenge.
As I pulled the Romney fleece from the bag, I all but buried my face to take in the smell. Later, I spread it out on my worktable, and simply LOOKED at it for a few days; thinking.  Thinking. Thinking. Thinking. 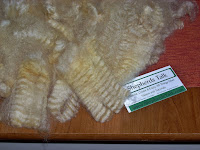 First, I needed to determine which spindle I would use. Ultimately, I chose my Little Meggie Kick Spindle [from Heavenly Handspinning]. I then needed to decide how I would spin my yarn. While I had not initially thought to spin three different yarns, I figured [seeing as how it was my first time] I would spin something more traditional.  With that decision though, came the idea to work with a pre-beaded technique. Something else I had never tried. 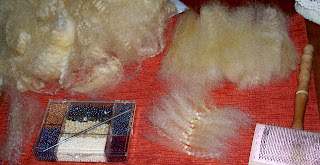 As I flick carded the 5-5 1/2 inch Romney locks, prepping small bits of the fiber with beads [via a crochet hook], a few questions came to mind. That there was little to no VM, I wondered if this had come from a coated Romney sheep. Do shepherds ever coat Romney sheep? Or--- is this practice saved solely for the more pricy fleeces such as Teeswater and Wensleydales? And IF so, since a coated fleece doesn't have to work as hard protecting itself against the elements, does a coated fleece produce less grease?

Special Note: Only after I shared my experience with Pam and Virginia,
did I see the Romney Promo video on their Facebook and Home pages
which answered my "Coated" questions. 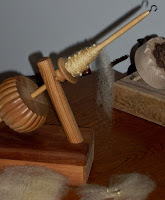 I do love the feel of the lanolin on my hands.  In addition, it took a good yard or so of spinning before I got the feel for how I would spin my yarn(s).  I cannot claim that my first single was the most perfect I have ever spun.  Not only did I have the challenge of never having spun a raw fleece, I was playing with a beading technique [a different video option] that I might have better learned with a washed fiber.
I then hesitated--- thinking that winding this single into my usual center pull ball [how I've chosen to do most of my plying of late], that being both greasy, and filled of beads, it might not be my best choice. But--- I did not have the time to spin another single. [With health issues, I generally spin on a smaller scale; taking many breaks.] So--- into a ball it went. 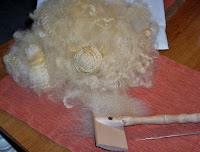 What I will NOT do the next time? My plying spindle of choice, of late, has been my Navajo Spindle.  While I discovered I had no real issues with either the beads or the grease as I pulled and unwrapped from the ball, I do not believe I will opt to use this particular spindle for future raw fleece, as the greasy yarn--rubbing along the side of my pant leg--caught at times; slowing down my overall spin.
﻿ 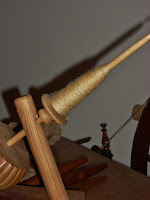 The second single [not quite a lace weight] I spun straight up traditional; though many might not see spinning from a kick spindle--- from a tabletop [to boot!]--- as being traditional.  But, I found the spinning of this single very meditative. This was a much smoother spin. And, I learned even more so with this single, that sweaty hands and lanolin do not seem to go together rather well. So--- there was a lot of hand washing.  But, after I got that single wound, into another center pull ball, it was time for more plying.


From the get-go, this yarn was destined for plying on the kick spindle. Especially since, I had intended to do a simple tweed effect.  However--- what I ended up doing was more of a series of little cocoons; done with pinches of Soffsilk.  Either way--- I LOVE it.  The tweed will just have to wait for another day. (~: 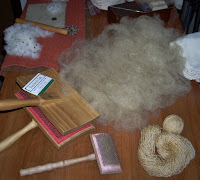 There was still a bit--not quite a third of the 2 ounces left--what needed something to do. I looked at what was left over for another day or so. I had already flick carded all those bits that looked like crinkle fries, so--- hand picking it into a cloud seemed the logical next step to me. And no. I do not own a real picker. 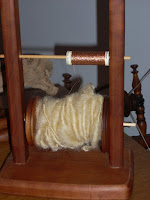 This was going to be my fun yarn; my hopeful Art Yarn. I both flick and hand carded the fiber, to remove what little VM still remained, and then I handpicked the fiber into a cloud. There was a LOT of picking going on. Once that was completed, I chose a coreless spinning method that I learned from watching Natalie Reading [via her old Livestream videos], and then I corespun my single. I chose a copper metallic thread with which to ply, and--- Voila!

While I am not happy with certain sections of my plying--- that being--- having done so much spinning in such a relatively short period of time, my fingers were not working as well as when I first started, and I was finding it difficult to maintain my usual hold.
Would I spin raw fiber again? From never having done so--- to feeling a tad apprehensive--- to---  Oh, yes! Most definitely.  Though, I do admit to wanting to spin a washed Romney, now, simply to experience and appreciate the difference. I also believe that if I have another chance to spin in the grease, I would like to pull out my wheel, and do a wheel-spun yarn for a change.

Thank you so much, Pam and Virginia [of Shepherds Talk], for your gracious invitation. This was such a fun opportunity, and truly a pleasure. Blessings~

Now--- as for what I might do with these yarns?  While I will definitely save the Art Yarn for Weaving, I would very much like to knit a Hat Band for my old felt Winter Hat. I'll update this post, when I get it finished. In the meantime---


Follow me to my Facebook Community/Studio Page @ HeartSong Studio
Bye for now, and Blessings~
And Happy Weaving!
﻿ 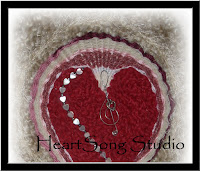 Posted by HeartSong Studio at 2:30 PM 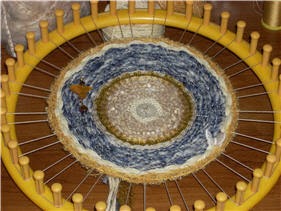 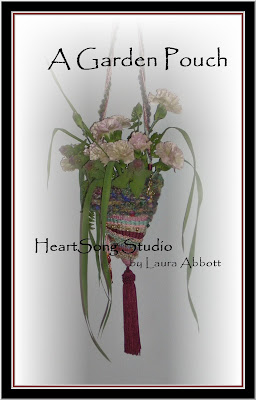 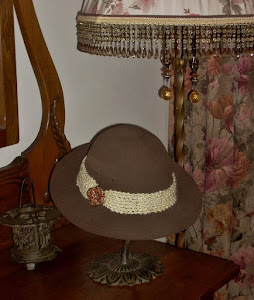 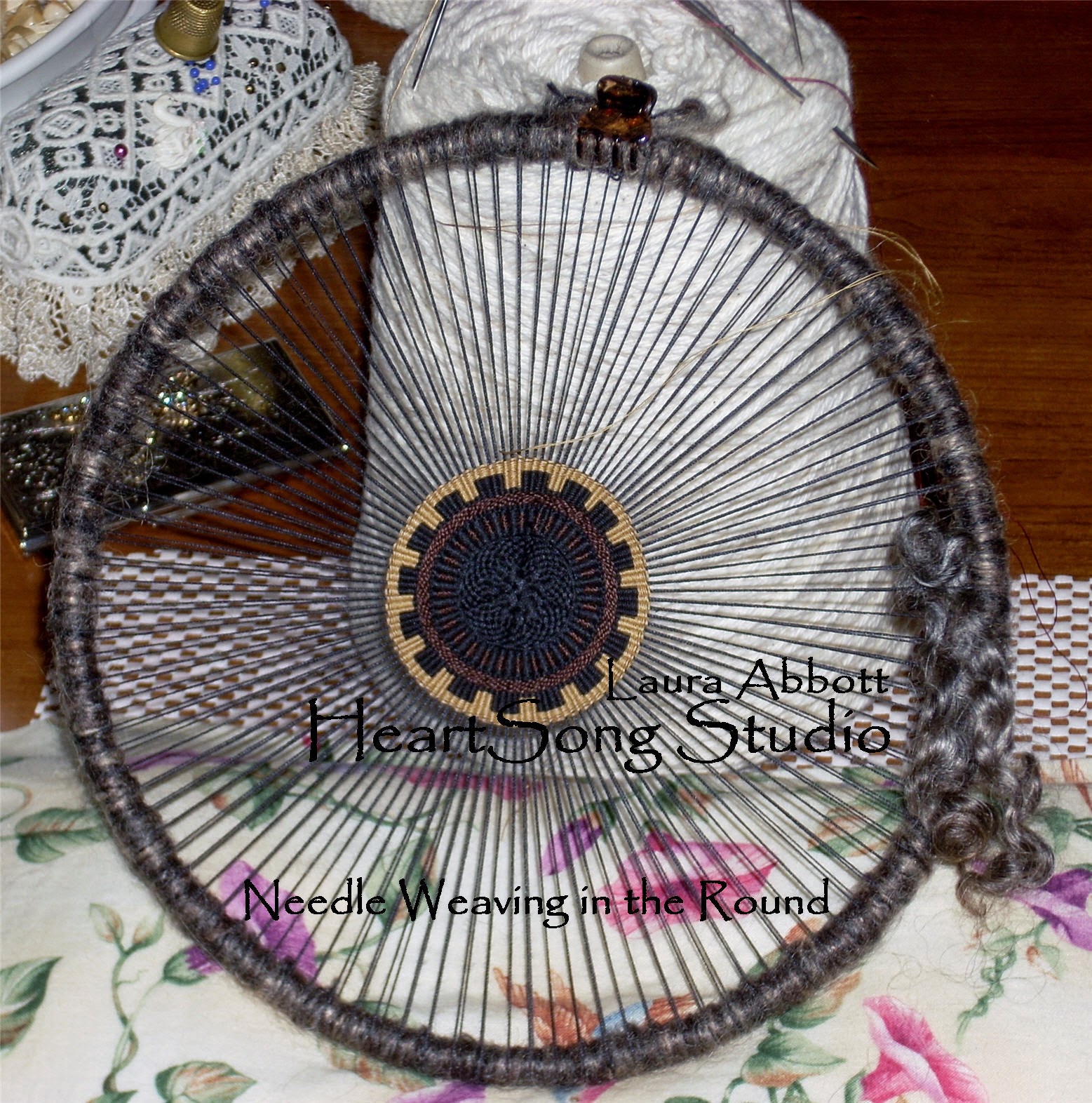 Join me for other projects and info shares.

Donations for the Rendering of my Services would be MOST sincerely welcomed! 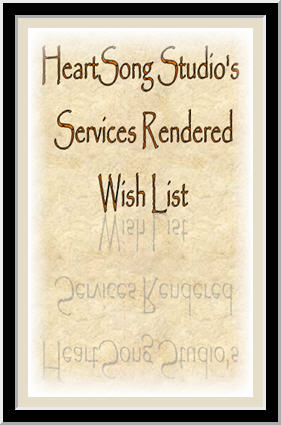 A MUST for Hand Spinners 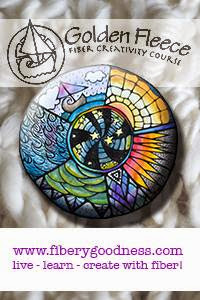 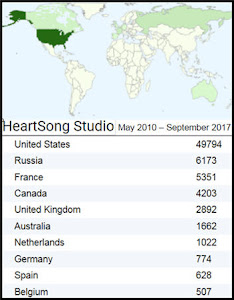